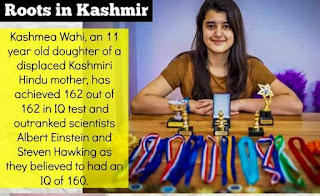 Ever heard of this kind of persons... breaking news !! let this be an introduction to this page

My dear Learners, I wanted to begin in a different way to start communicating with you all. I am as a learner of Psychology, been tremendously interested in the matters of Brain, Intelligence, Evolution, Learning etc. I, well under the topic of Intelligence that we have to study as a part of our curriculum, have arranged for both pictures, text and videos on Exceptional Children. First things first...

Quoting from Wikipedia (@https://en.wikipedia.org.wiki /Intellectual_giftedness) In Identifying Gifted Children: A Practical Guide, Susan K. Johnsen explains that gifted children all exhibit the potential for high performance in the areas included in the United States' federal definition of gifted and talented students:[11]  As far as the United Statesis concerned there is a federal government statutory definition of gifted and talented students.... goes like this......

The term "gifted and talented" when used in respect to students, children, or youth means students, children, or youth who give evidence of high performance capability in areas such as intellectual, creative, artistic, or leadership capacity, or in specific academic fields, and who require services or activities not ordinarily provided by the school in order to fully develop such capabilities." (P.L. 103–382, Title XIV, p. 388)

This definition has been adopted partially or completely by the majority of the individual states in the United States (which have the main responsibility for education policy as compared to the federal government). Most states have a definition similar to that used in the State of Texas:

"Gifted and talented student" means a child or youth who performs at or shows the potential for performing at a remarkably high level of accomplishment when compared to others of the same age, experience, or environment, and who exhibits high performance capability in an intellectual, creative, or artistic area; possesses an unusual capacity for leadership; or excels in a specific academic field." (74th legislature of the State of Texas, Chapter 29, Subchapter D, Section 29.121)

The major characteristics of these children in these definitions are......
(a) the diversity of areas in which performance may be exhibited (e.g., intellectual, creativity, artistic, leadership, academically)
(b) the comparison with other groups (e.g., those in general education classrooms or of the same age, experience, or environment), and
(c) the use of terms that imply a need for development of the gift (e.g., capability and potential).


Generally, gifted individuals learn more quickly, deeply, and broadly than their peers. Gifted children may learn to read early and operate at the same level as normal children who are significantly older. The gifted tend to demonstrate high reasoning ability, creativity, curiosity, a large vocabulary, and an excellent memory. They can often master concepts with few repetitions. They may also be perfectionistic, and may frequently question authority. Some have trouble relating to or communicating with their peers because of disparities in vocabulary size (especially in the early years), personality, interests, and motivation. As children, they may prefer the company of older children or adults.[29]

Giftedness is frequently not evenly distributed throughout all intellectual spheres; an individual may excel in solving logic problems yet be a poor speller; another gifted individual may be able to read and write at a far above-average level yet have trouble with mathematics.

Giftedness may become noticeable in individuals at different points of development. While early development (i.e. speaking or reading at a very young age) usually comes with giftedness, it is not a determinant of giftedness.
Similarly there is another term CHILD PRODIGY that is used in Psychology research  literature, the term child prodigy is defined as person under the age of ten who produces meaningful output in some domain to the level of an adult expert performer but then Prodigiousness in childhood does not always predict adult eminence .

(https://en.wikipedia.org/wiki/List_of_child_prodigies)
In Physics: Blaise Pascal 1623–1662) was a French mathematician, physicist, and religious philosopher who wrote a treatise on vibrating bodies at the age of nine; his first proof, on a wall with a piece of coal, at 11 years old, and a theorem by 16 years old. He is famous for Pascal's theorem and many other contributions in mathematics, philosophy, and physics

In Mathematics Srinivasa Ramanujan (1887–1920), was an Indian mathematician and autodidact who, with almost no formal training in pure mathematics, learned college-level mathematics by age 11, and generated his own theorems in number theory and Bernoulli numbers by age 13 (including independently re-discovering Euler's identity).

An educative- informative page on this issue may be found  for further studies at http://www.hoagiesgifted.org/highly_gifted.htm


CATEGORY I.  THE EXCEPTIONALLY GIFTED

Lets begin,  the first in the series being a one on a 12 Year old child who has reportedly Autism but has an I.Q. of 170 over and above Einstein's.
http://www.youtube.com/watch?v=yC7BEStQ6kg
those interested in the Video. here's it is....

Been away for long. I have been around collecting data and doing other things. here is another instance of an exceptional child for you.. 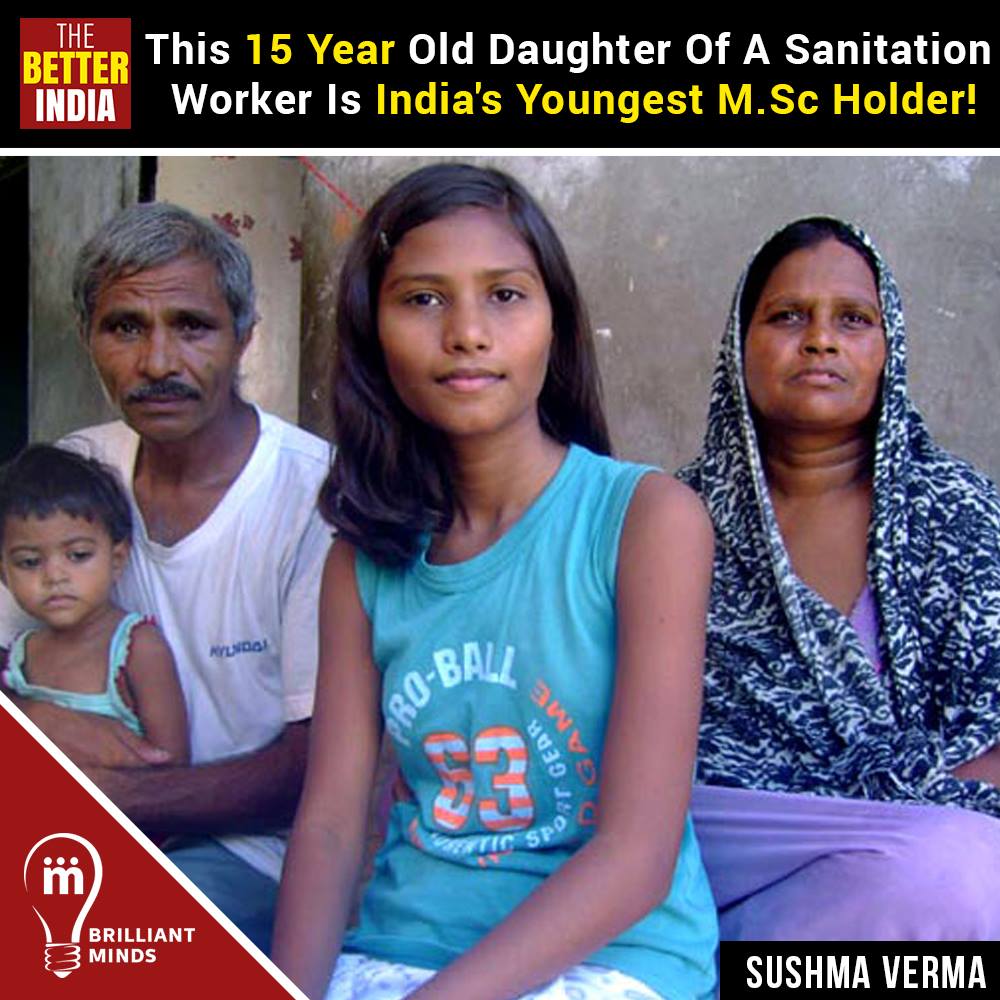 Meet Sushma Verma, aka Sushma Gaikwad a 15-year old young genius from the outskirts of Lucknow, Uttar Pradesh, who has made headlines by clearing MSc (Microbiology) from Babasaheb Bhimrao Ambedkar (Central) University (BBAU). She was just five when she was directly enrolled in class IX in 2005.


When she was seven, she got listed in the Limca Book of Records for being the ‘youngest student’ to pass class X. She was 13 when she completed her graduation and at the age of 15, she has created yet another record by finishing her Msc. And that too with a Semester Grade Point Average (SGPAs) of 8!

She not only cleared the course with flying colours, but also topped the class in the first, second and third semesters in spite of being the youngest in the class. Most of her classmates were at least eight to nine years older than her.

Her talent was discovered when she recited the Ramayana at a local school function at the age of two. Her brother Shailendra, who is also a prodigy, had cleared class 10 at the age of nine and became the youngest science graduate at the age of 14. She would often read her brother’s books and took training from her teachers to solve the problems quickly.

Her brilliance does not just shine in India. She was invited for an IQ test in Japan where she competed with 35 other students of her age and stood first.

She aspires to become a doctor but her age came in between her dreams and her CPMT results were withheld because she was under age. As she couldn’t pursue the medical course due to age constraints, she thought of finishing her PhD till she turns 17.
Daughter of a sanitation worker who is employed in the same college where she studied her Msc, Sushma was also given a grant of Rs. 8,00,000 by Sulabh’s chief Dr Bindeshwari Pathak towards higher education. Sushma is indeed a rare talent who has surprised the world with her incredible achievements. She has yet again proved that true talent can find its right place in spite of many challenges.

We congratulate Sushma on all her achievements and hope to see her scaling great heights.

Ainan Celeste Cawley, 11, is a scientific child prodigy. Ainan gained international attention when he passed the Chemistry O level exam at the age of 7, an exam aimed for teenagers over 16. He entered the Singapore Polytechnic when he was 8, becoming the world’s youngest student ever to attend a third-year tertiary module.

The Wall Street Journal, The Times, Bild Deutschland, The Sun, The Daily Telegraph and many other newspapers have written about Ainan. Believe it or not, this little genius gave a science lecture – Acids And Alkalis In Everyday Life – at a Singaporean School when he was only six years old.
Case 4:   Marko Casalan ... the youngest Computer Administrator

Marko Caslan is a 10-year old little genius from Skopje, Macedonia. At the age of 8, Marko was officially recognized as the world’s youngest certified computer system admin. Widely regarded as the Mozart of Computers, Marko passed many of Microsoft’s exams for IT professionals. “The Microsoft officials gave me computer games and DVDs with cartoons when I passed the exams because I am a child. That was nice, but I’m not really interested in those things. I’d like to be a computer scientist when I grow up and create a new operational system,” declared Marko for Timesonline.co.uk.

He has been in the company of the world’s most notable political figures and Nobel Prize winners and laureates: Michel Gorbachev, Bill Clinton, Betty Williams, Desmond Tutu and many more. He founded the International Youth Advocates Foundation. Gregory’shumanitarian and advocacy efforts on several continents earned him the four nominations. According to ForceForGood.org, Gregory “has organized humanitarian aid projects for East Timor orphans, the youth in Sao Paulo, Brazil and is helping Rwanda build their first public library. He is working with Christian Children’s Fund, as Youth Ambassador, to build Peace Schools in Kenya and other conflict regions.” These are only some of the many projects undertaken by Gregory.

The Indian teenager gained international attention as a physician, despite never attending or graduating Medical School. While most of us were playing with cars and dolls at the age of seven, Akrit performed surgery! His patient was a badly burned young girl whose shepherd family couldn’t afford surgery.
Akrit had the reputation of a medical genius, so local doctors allowed him to observe various surgeries. Driven by a strong passion for anatomy and science, he used to read at six everything he could find on human anatomy. Akrit was writing and reading by two and by the time he was five, he was reading Shakespeare…in English.
Akrit is now trying to find a cure for cancer. “I’ve developed a concept called oral gene therapy on the basis of my research and my theories. I’m quite dedicated towards working on this mechanism,” said the teenager from Himachal Pradesh, India.


The above video was taken when he was 6 years old
Ethan Bortnick, pianist, songwriter, composer, entertainer and one of the world’s youngest philanthropists. Ethan, 11, has helped raise more than $25 million for so many charities. He began playing the piano at the age of three and was composing by the age of five. This hugely talented child is able to play any song by ear and his complex compositions and performances are widely recognized as outstanding. Arctic Jazz is my favorite song written by Ethan. What’s yours?
Ethan appeared on The Oprah Winfrey Show, The Tonight Show with Jay Leno, Good Morning America, The Martha Stewart Show and many more. It’s a delight to watch Ethan. Isn’t it amazing how he entertains the crowd? Here’s Ethan with Jay:

It took me four years to paint like Raphael, but a lifetime to paint like a child,” once said Pablo Picasso.
Nicknamed das Wunderkind, Pee-wee Picasso or the Prodigy of Color, Aelita Andre is a four year old abstract painter. Actually, she is the youngest professional painter in the world. Art critics have compared her work to Picasso, Salvador Dali, Wassily Kandinsky or Jackson Pollock. Aelita’s most expensive painting was sold in Hong Kong for $24,000. She opened last month her first solo art exhibition in New York City.
Abstract art is hard to understand and appreciate, no wonder most people don’t like it. It’s sad to read different negative comments across the Internet, however, the great part is that all major newspapers and  internationally renowned art critics responded favorably to Aelita’s work.

Did you just pay a visit?