There is a lot of confusion about constructivism, amongst the trainees and the school teachers as well, Constructivism  which is a recent development in Learning theories around which the school curricula are now being re-scripted.. Students need to understand its main tenets and the conditions under which it originated. Here is a small help to my learners...

Constructivism is not a specific pedagogy, although it is often confused with constructionism, an educational theory developed by Seymour Papert. It was inspired by constructivist and experiential learning ideas of Jean Piaget. Piaget's theory of constructivist learning has had wide ranging impact on learning theories and teaching methods in education and is an underlying theme of many education reform movements. 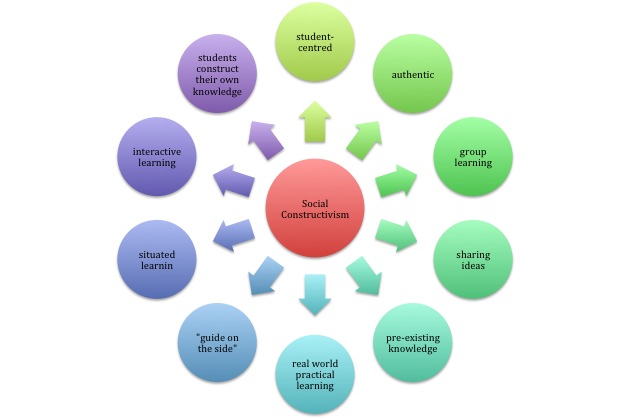 Learning always builds upon knowledge that a student already knows; this prior knowledge is called a schema. Because all learning is filtered through pre-existing schemata, constructivists suggest that learning is more effective when a student is actively engaged in the learning process rather than attempting to receive knowledge passively.

1. learning is an active social process, where the context is equally an important factor affecting
learning. The social constructivist paradigm views the context in which the learning occurs as central
to the learning itself (McMahon 1997).People learn to learn as they learn:learning consists both of constructing meaning and constructing systems of meaning.

2. McMahon (1997) agrees that learning is a social process. He further states that learning is not a process that only takes place inside our minds, nor is it a passive development of our behaviors that is  shaped by external forces and that meaningful learning occurs when individuals are engaged in social   activities.

3. learning as an active process where learners should learn to discover principles, concepts and facts for themselves, hence the importance of encouraging guesswork and intuitive thinking in learners (Brown et al.1989; Ackerman 1996). The more traditional formulation of this idea involves the terminology of the active learner (Dewey's term) stressing that the learner needs to do something; that learning is not the passive acceptance of knowledge which exists "out there" but that learning involves the learner s engaging with the world.

4. Other constructivist scholars agree with this and emphasize that individuals make meanings through  the interactions with each other and with the environment they live in. Knowledge is thus a product of  humans and is socially and culturally constructed (Ernest 1991; Prawat and Floden 1994)

5. Knowledge should not be divided into different subjects or compartments, but should be discovered as an integrated whole (McMahon 1997; Di Vesta 1987). but... One needs knowledge to learn: it is not possible to assimilate new knowledge without having some structure developed from previous knowledge to build on. The more we know, the more we can learn. Therefore any effort to teach must be connected to the state of the learner, must provide a path into the subject for the learner based on that learner's previous knowledge.

7. Motivation is a key component in learning. Not only is it the case that motivation helps learning, it is essential for learning. This ideas of motivation as described here is broadly conceived to include an understanding of ways in which the knowledge can be used. Unless we know "the reasons why", we may not be very involved in using the knowledge that may be instilled in us. even by the most severe and direct teaching.

Learners please check out this You tube video on Educational Philosophy: Constructivism


Teaching Strategies: (As given by Audrey Gray)

Using the constructivist learning theory in the classroom requires the teacher to avoid direct guidance of the students. Instead, she/he sets
Accordingly they could have......


In the constructivist classroom, the teacher’s role is to prompt and facilitate discussion. Thus, the teacher’s main focus should be on guiding students by asking questions that will lead them to develop their own conclusions on the subject. David Jonassen identified three major roles for facilitators to support students in constructivist learning environments.
 Modeling  Coaching  Scaffolding

Did you just pay a visit?